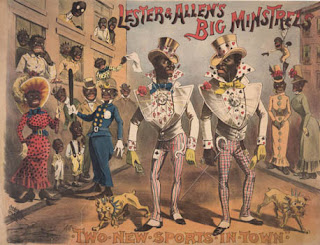 Lester & Allen’s Minstrels arrived in Cleveland, Ohio for a three-day booking after a long series of one-night stands. On Thursday, October 7, 1886,  the 40-member company marched in a “grand parade" and then proceeded to give five sold out performances at the Cleveland Theater. Amongst the blackface singers, dancers, and comedians were the Barham Brothers who performed shadowgraphs. Sitting in the audience at one show, was a stage struck 19-year-old, Pauline Jackson. She met the 29-year-old Lewis (Louis) Braham and his older brother Abraham, either at the theater or through the local Jewish community.  By Monday Pauline had been persuaded by Lewis to leave with him. She found herself on the way to their next performance in  Sandusky, Ohio. Lester & Allen’s Minstrels then played another series of one-night stands through Michigan, Illinois and Indiana finally arriving in Chicago for a week-long engagement. There on October 19th Lewis and Pauline were married before an evening performance.  The newlyweds had only a few short days for a honeymoon before their next performance in Rockford, Illinois. Then it was off to the Midwest and a life in show business.

Very little is known about Pauline’s childhood or home life. She was born in Cleveland on December 16, 1867. Her father was a physician who had immigrated from Prussia and her mother was from New York. Pauline and her three siblings grew up in the vibrant Jewish community in that city.  When she was a teenager, her older brother suffered a nervous breakdown while attending medical school and was committed to an asylum. Soon after she was reported to have taken ill. These traumatic events and the effect on her family life could have been part of her decision to join Lewis.

Lewis was born in Manchester, England on February 14, 1857. His father was a traveling cloth merchant. About 1876, he and his older brother Abraham immigrated to American. The brothers became involved in showbusiness working backstage. Lewis was a stage manager at a Philadelphia museum and Abraham was probably a stage carpenter, an occupation he followed for much of his later life. The brothers then developed an act based on shadow puppetry.  Flat articulated cut-out figures where held between a strong light source and a translucent screen. The puppets would be manipulated to produce a moving shadow on the screen. The audience would see figures moving around producing comic or dramatic scenes. They started to successfully tour as the Braham Brothers in 1885 playing variety theaters, minstrel shows and museums.

By 1889 Abraham had left and Lewis and Pauline took over the act. That spring Pauline became pregnant with their first child and Ethel was born in Titusville, Pennsylvania on February 10, 1890. A month later they were back on the road playing at a variety theater in Buffalo, New York.

There was an ever-increasing number of shadowgraph acts touring due in part to the ease and reasonable cost of building one. Lewis must have recognized the growing competition and started developing a new act. He drew on the “handcuff test” and the spirit cabinet performed for many years both by magicians and fraudulent mediums to build a new act. It was based on  just escaping from handcuffs  and other restraints. He decided to have Pauline do all the escapes and he would act as the presenter.

In the summer of 1890, they began performing the new act under the title “The Braham’s Mysterious Cabinet” at small variety theaters and museums. It basically consisted of a volunteer from the audience placing handcuffs on Pauline’s wrists. She would enter a cabinet and within 60 seconds emerge free of the restraints. Then another volunteer would handcuff Pauline and place her head and feet in a locked stock within the cabinet. She would again escape in just a few seconds. The finale was a challenge to forfeit a sum of money if Pauline could not escape any police or detective’s handcuffs. They also offered to escape from any handcuffs provided by the audience.

The act was claimed to be superior to the Davenports, harkening back to the days of the spirit cabinet. This all changed when, in early November, they joined a very successful burlesque company “The Night Owls”. This company advertised 40 handsome women and 20 shapely pretty girls lead by Pauline Markham the Queen of Burlesque. Pauline now used the name Owanda Lewis and Lewis used Rudolph Paul. The act was billed as “Lewis and Paul – Detective Defiers.” The Night Owls in their newspaper advertising gave the following challenge to all local law enforcement officers:

“How is it done? A challenge to the detective and police bureaus.

Lewis and Paul will introduce their mysterious handcuff act. $150 given to anyone belonging to the police department who can handcuff the lady successfully. That is, Miss Lewis will forfeit the above amount if she fails to release herself in sixty seconds from any handcuffs placed upon her, providing the police official who places them on her wrist, forfeits on his part $50, to be given to the poor of Philadelphia. If she successfully accomplishes the feat in the time stated (sixty seconds).

Invitation extended to all detectives and police officials to be present and put the lady and gentleman to the test. Everything done in the light, no dark cabinets. A genuine novelty, nothing like it ever seen before.” (Times, November 2, 1890, Philadelphia. Pennsylvania)

The Brahmas performed in the olio with other specialty acts, including Delhauer the Frog Man. Oddly, the act was sometimes advertised as “the great Hungarian novelty”. “Lewis and Paul” were almost always mentioned in newspaper reviews and got a good bit of local publicity. In Boston they were reportedly presented gold medals by Ed Bean, the inventor and manufacturer of the Bean handcuffs, for being able to escape from a pair of his handcuffs without using a key or file.

Realizing the act’s novelty and potential for success they placed a large advertisement in the New York Clipper highlighting the handcuff challenge (New York Clipper, December 6, 1890).

The advertisement did not seem to have a large impact on their future bookings. Leaving “The Night Owls” in early January 1891 they performed until the summer with touring repertory companies and at museums in Pennsylvania and New York. They sometimes presented both the escape and shadowgraph acts on the same bill. In September, Pauline stopped touring due to her recent pregnancy. While Lewis kept on touring as a single using the billing “Lewis Paul - The Detective Defier”.

Their son was born March 23, 1892 in Cleveland. By this this time their marriage had fallen apart. Soon after his son's birth, Lewis was out touring doing the escape act. First a single and then with a new female partner, using the billing “Lewis and Paul”. In October Pauline filed for divorce, alleging that Lewis had been physically abusive and was now traveling with another woman. She said at her hearing that Lewis had left her just before their son was born, taking her jewelry with him.  The divorce was granted in February 1893 and she was awarded $500 as alimony. Pauline then moved to Sault Ste. Marie, Michigan to be with her mother. Sadly, her son died sometime before 1899.

Pauline married Rolla Shaw, a milk dealer, in Cleveland on June of 1893. This marriage ended in divorce in 1897. In January of 1899 Pauline married William Cook, her close neighbor. He was a grocer and later became a policeman. This turned out to be a stable and apparently happy marriage. William quickly adopted his wife's then 10 year old daughter Ethel. William and Pauline were married for over 25 years. She died on February 22, 1925 and is buried in Cleveland’s Lake View Cemetery.

After the divorce Lewis kept touring as an escape artist and performing a shadowgraph act. He died in Chicago on July 19, 1913 and was buried in Evergreen Cemetery just outside of Chicago.

Pauline and Lewis were pioneers in the development of the escape act. Paul was probably the first person to develop the core elements of the challenge handcuff escape act as we know it today. Though novel, the act as they presented it never caught on. It may be that Lewis and Pauline were more use to being back stage when operating the shadowgraphs and did not have the needed stage presence or showmanship. They were also a bit too early to enjoy the benefits of the vaudeville circuits that propelled Houdini to fame. It would not be until around 1900 that other Handcuff Queens started to emerge. However, Pauline started it all.