Showing posts from March, 2018
Show all

The premiere of Houdini’s serial The Master Mystery was shown on November 18, 1918 to a sellout crowd at Boston’s St. James Theatre. This was Harry’s Hollywood movie debut.   Each of the 15 episodes featured Houdini escaping from various life-threatening situations: being restrained at the bottom of an elevator shaft with an elevator car rapidly descending, being strapped into an electric chair, being snared in coils of barbed wire. All were filmed close-up with no cuts, to reassure audiences that no trick photography was used. This thrilling adventure even included the first robot featured in a movie. The serial opened to good reviews and was shown all over the world. To publicize the film, Houdini made 15 personal appearances in theaters in the Boston area in a single day! This was preceded by extensive publicity using billboards, newspaper advertisements and flyers. Building on this promotional effort, one enterprising theater booked Lasco “The Female Houdini” as one of its
Post a Comment
Read more 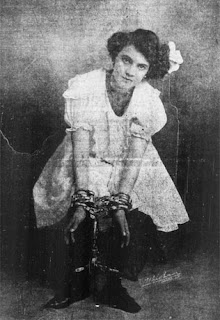 Daily Huonite , June 2 1909 Huron, SD On November 30, 1908, Mlle. Ybur stepped onto the stage at Vancouver’s Grand Theatre and thrilled the audience by escaping from various handcuffs - some provided by the local police -  and then from a sealed sack locked in a trunk. It was announced that later in the week she would escape from a straitjacket and a wooden packing crate. Soon she added the milk can escape to the act, advertised as follows: “The Death Defying Milk Can Mystery. A pretty girl. A bathing suit. A milk can filled with water. Six padlocks. From the new Wigwam Theater, ‘Frisco.” From here she continued through eastern Canada and the Northwest and Midwest United States. Ybur, her real name is sadly unknown, was reportedly from San Francisco, California. She said she started her career there when a local manager helped her develop the act. In a later interview, Ybur mentioned a handcuff dive off the Washington Street dock into San Francisco Bay. When Ybur swam to shore
Post a Comment
Read more

In 1914 Emily Schupp began her professional career performing interpretive dance as popularized by Isadora Duncan in the early 1900s. Emily spent years studying folk dancing in Europe and brought these skills to the American stage. Her New York debut in April 1914 was a rousing success and she became a very popular performer. Adopting the stage name of “Lada”, she successfully toured until the early 1920s.   Seeing the growing popularity of Schupp’s performances, in 1915 some enterprising vaudeville manager started a novelty dance act called “Madam La Da & Company.” The novelty part was that “Madam La Da” did escapes. Billed as “The Wizards of Locks, Bolts and Bars,” she escaped from handcuffs, a locked mail bag and a straitjacket in full view of the audience. How they combined a dance number with escapes, unfortunately, was never mentioned in the reviews. Not surprisingly the act lasted only one season. Much shorter that the real “Lada.” The name of the performer who was bille
Post a Comment
Read more
More posts